Hey everybody, the SCENESTER collected edition is still at the printer's--I was told that it would be ready this week sometime, and I was crossing my fingers that it would be ready in time for New Comic Day, but it looks like that probably won't happen. Hopefully within the next day or two, just not tomorrow. Meanwhile, however, here's another quick look at a few pages! 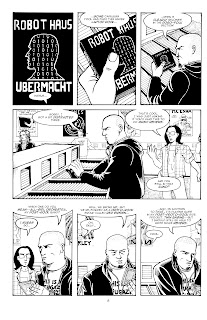 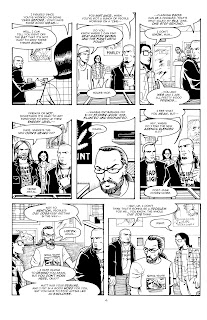 Posted by Dave Howlett at 6:08 PM No comments:

We're hopefully just a few days away from SCENESTER: THE INEVITABLE COLLECTED EDITION coming back from the printer's (I was hoping I might have it to sell at the Strange Adventures booth this Sunday at Word On The Street, but it's not looking too likely), but in the meantime, here's a sneak preview of the first three pages. Please enjoy them, even though Drake would have to be standing on about three milk crates for the perspective in that first panel to make any sense. 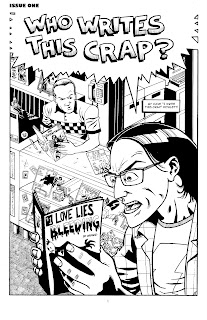 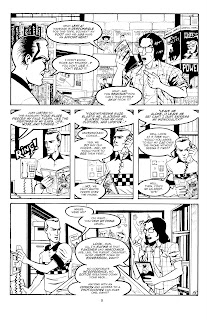 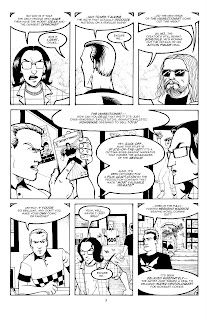 Posted by Dave Howlett at 5:25 AM No comments:

Hello everybody, and welcome to TUCO COMICS! This is the new home for comics by me, Dave Howlett. Right here is the spot for updates about my 80s wrestling comic, SLAM-A-RAMA, and my early 2000s hipster/pop culture comic SCENESTER. You may have seen SLAM-A-RAMA in its original incarnation--a black-and-white minicomic called THE SQUARED CIRCLE (I changed the name to avoid confusion with a webcomic of the same name), or over at its own official site under its new name, where I've been posting colour pages for nearly a year now. You may also have seen SCENESTER as three black-and-white minicomics published in 2002 and 2003. However, you likely haven't seen either of them in their newest incarnations--SCENESTER: THE INEVITABLE COLLECTED EDITION, a  60-page reprint of the original issues, with a colour cover, or the five full-colour issues that make up the complete SLAM-A-RAMA--because they haven't been printed yet. Well, that's about to change, since the SCENESTER collection is at the printers right now, and the first two issues of SLAM-A-RAMA will be soon to follow (issue three will be ready for Christmas, with issues four and five following in Spring and Summer 2011). The plan is to debut SCENESTER and the first two SLAM-A-RAMA issues at the Halifax Pop Explosion's 'Zine Fair on October 23, although there's a good chance they'll both be available at all three Strange Adventures Comic Bookshops locations (Halifax, Dartmouth, and Fredericton) and, hopefully, at other cool locations to be announced in the very near future. Of course, if you can't get 'em in person, email me at tucocomics@gmail.com and I'll mail 'em right to your doorstep.

In the meantime, though, here's a peek at the newly-coloured cover to SCENESTER: THE INEVITABLE COLLECTED EDITION, available soon! 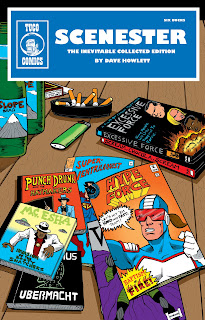 Posted by Dave Howlett at 12:44 PM No comments:

Buy Tuco Comics Online! Prices Include Shipping in Canada and the US.