Hey, the Tuco Comics store is open for business! You can buy Scenester: The Inevitable Collected Edition for $7.00, or issues of Slam-A-Rama for $5.00 each. Prices include shipping within the US and Canada, email me at tucocomics@gmail.com if you're elsewhere and we'll figure something out. One quick note--Slam-A-Rama #4 won't be available until after August 28, because I'll be debuting it at Fan Expo in Toronto the weekend of August 25th! Drop by the booth (where I'll also be hanging with the gang from Snakor's Pizza) and say hi!
Posted by Dave Howlett at 12:27 PM No comments: 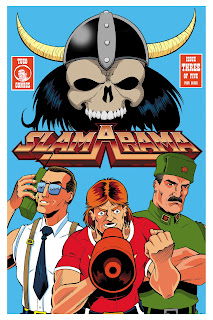 I'm a few weeks off my target date--I was hoping to be writing this closer to Christmas--but SLAM-A-RAMA #3 is finally at the printer! Hopefully this means it'll be on sale sometime around the end of the month. Watch this space for updates!
Posted by Dave Howlett at 10:56 AM No comments:

So page 72 of SLAM-A-RAMA is now up at http://slamaramacomic.blogspot.com/. This means that what constitutes the third issue of this five-part series is now done, and I'm hoping to have the print version of it ready to go by the end of December, or maybe the beginning of January. There's a lot of boring file conversion and re-sizing to do first, not to mention the cover art (I broke down the remaining three covers during my downtime on the slow first day of Expozine), but rest assured, it's on its way! Also, I wanna get a good chunk of issue four in the can before I go to press on three, just so there's not such a huge wait. Anyway, onward and upward!
Posted by Dave Howlett at 4:37 AM No comments:

I headed off to Montreal this past weekend to sell my stuff at Expozine. I crammed into a car with fellow comic folks Jordyn Bochon and Mike Holmes, and hocked my wares for two days in a super-crowded church basement. The first day was pretty slow for me, as I got there too late to get a prime spot and was jammed elbow-to-elbow between other guests with about a three-foot-by-three-foot space for my stuff. This did, however, give me plenty of time to work out the cover layouts for the remaining three issues of SLAM-A-RAMA, so that's cool. Day Two, however, was a big improvement, since Jordyn and I got there early enough to switch to a bigger, shared table, and I sold lots more books (to complete strangers, which is a plus). Also, I realized I really need to make business cards up one of these days. All in all, I figure I about broke even, which is certainly better than losing money, right?

I really should have taken pictures at the event, but I never got around to it. The only pictures I did take in Montreal that really turned out were this shot of a mannequin that, if you asked somebody to draw you a "French-looking mannequin", would be unable to draw anything other than a mannequin that looked exactly like this: 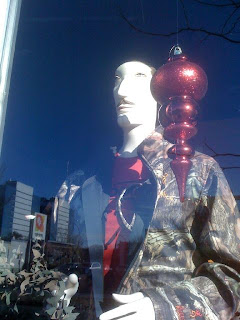 The other photo I took was actually on the way out of Montreal, and it advertised some sort of cotton candy that I believe is supposed to be made out of cat vomit: 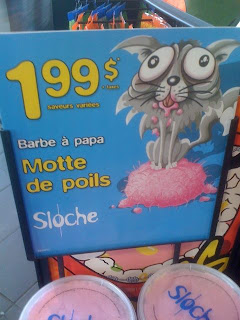 Can you believe Mike actually bought some? And offered me some, no less? Anyways, good times. In related news, SLAM-A-RAMA is two pages away from being finished (I probably would have been done by now, except that I, you know, was out of town selling the first two), so keep your eyes peeled here for updates (most of the issue is online here).
Posted by Dave Howlett at 7:27 PM No comments: 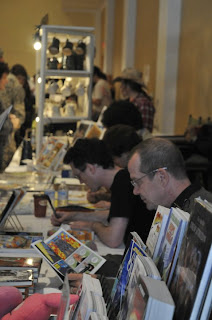 Yep, that's Darwyn Cooke, checking out the first issue of SLAM-A-RAMA at Hal-Con this past weekend.  The photo was taken by Calum Johnston, who was kind enough to seat me next to Darwyn on Saturday and Sunday--a pretty high profile seat at any convention. It was a great show, with lots of crazy costumes (man, people sure do love DOCTOR WHO these days!), and I sold lots of SCENESTER and SLAM-A-RAMA and did lots of drawings for people (mostly kids, which is awesome--I think I drew my first-ever Ghost Rider!). If anything, the experience taught me that I really need to be sketching for at least a few minutes a day, just to stay in the habit. It's been a week since the show, and I still need to get that particular discipline up and running.

I'll be off to Montreal for Expozine next weekend, which should be fun. I hope no one's upset that I don't  have my stuff translated into French yet.
Posted by Dave Howlett at 8:26 PM No comments:

Tuco Comics, Now At a Store (Hopefully) Near You!

Hey folks, just a quick update in time for New Comic Day tomorrow...SCENESTER and SLAM-A-RAMA are now available at all three Strange Adventures locations (5262 Sackville Street in Halifax, 101 Portland Street in Dartmouth, and 68 York Street in Fredericton), as well as Obsolete Records at 2454 Agricola Street in Halifax. Not only that, but if you're in the Toronto area, you can grab these fine funnybooks at the Silver Snail, 367 Queen Street West! And of course, if you can't get to any of these locations, email me at tucocomics@gmail.com and I'll mail 'em right to your doorstep.
Posted by Dave Howlett at 5:47 PM No comments: 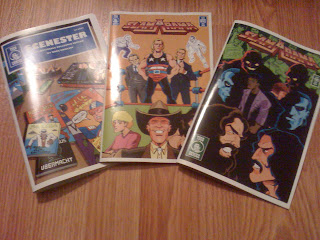 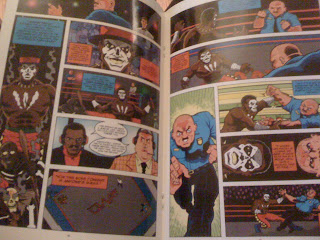 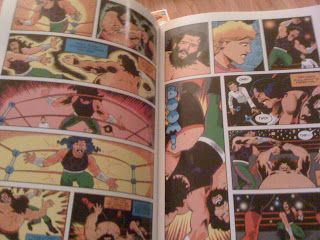 I can't believe it's finally almost here, but tomorrow brings us the Halifax Pop Explosion 'Zine Fair, and with it, the official launch of TUCO COMICS! I'll be there from 11 to 5 selling copies of SCENESTER: THE INEVITABLE COLLECTED EDITION (which, granted, has been on sale now for a couple of days already), and the first two issues of SLAM-A-RAMA, in full glorious colour! I'll be at the Strange Adventures table with my partner in crime and minicomics, Sean Jordan (AKA the Wordburglar), who'll be selling the first issue of his comic SNAKOR'S PIZZA (which I inked and lettered!), as well as Wordburglar vinyl from a few years back (which I provided the artwork for, back when I barely knew my way around Photoshop). We'll have a few other minicomics from our nefarious past on sale as well, so stop by, say hello, and for gosh's sake, buy some stuff from us! It's on, motherfathers!
PS If for some reason you can't make it tomorrow, all of these comics and more will be available at all three Strange Adventures locations in the days to come! And stay tuned for further updates about upcoming TUCO COMICS releases!
Posted by Dave Howlett at 5:19 PM No comments:

Buy Tuco Comics Online! Prices Include Shipping in Canada and the US.